How to win a Data Science competition ?

These are mainly notes for myself to win a Data Science competition , but I figured that they might be of interest to some of the blog readers too. Comments on what is written below are most welcome! 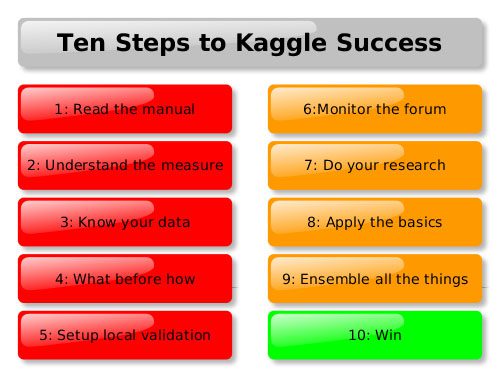 Typically, steps 1-5 would happen once per competition or problem, while steps 6-9 would be repeated in a loop or occur in parallel until you run out of time

First, identify Predictor (Input) and Target (output) variables. Next, identify the data type and category of the variables.

A key part of doing well in a competition is understanding how the performance measure works. It’s often easy to significantly improve your score by using an optimisation approach that is suitable to the measure. A classic example is optimising the mean absolute error (MAE) versus the mean square error (MSE). It’s easy to show that given no other data for a set of numbers, the predictor that minimises the MAE is the median, while the predictor that minimises the MSE is the mean.

When competing, exploiting anomalies in the data can work in your favour. For example, in the aforementioned hackathon, we noticed that even though we had to produce hourly predictions for air pollutant levels, the measured levels didn’t change every hour (probably due to limitations in the measuring equipment). This led us to try a simple “model” for the first few hours, where we predicted exactly the last measured value. This proved to be one of our most valuable insights. Obviously, this means that we were predicting what the measurement equipment would say rather than actual pollutant levels – something you’d definitely want to avoid in a real-life situation!

Understand the data and what useful patterns they want to model.

At this stage, we explore variables one by one. Method to perform uni-variate analysis will depend on whether the variable type is categorical or continuous. Let’s look at these methods and statistical measures for categorical and continuous variables individually:

Having a local validation environment allows you to move faster and produce more reliable results than when relying on leaderboard scores.

k-fold cross validation, which I used is, in general, a good enough start for most competitions. The decision regarding how to perform the split is critical. Random splits might be good enough at times. Other times the classes (0/1) are unbalanced so you might need to do stratified sampling or sometimes time-based splits (month, quarter, year, etc.) will have to be made.

Over time, I have learnt what it represents and why it’s an indispensable part of any machine learning problem.

For any given problem, it’s likely that there are people dedicating their lives to its solution. Those people (often academics) have probably published papers, benchmarks and code, which you can learn from.

You can read more about feature engineering.

Hyperparameters can be thought of as cogs which can be turned to fine-tune the machine that is your algorithm.

Running a method without minimal tuning is worse than not running it at all, because you may get a false negative – giving up on something that would actually work very well.

There are automated methods such as GridSearch and RandomizedSearch which can be used. Or Read this post for manual tuning

The idea is to combine models that were developed independently. In high-profile competitions, it is often the case that teams merge and gain a significant boost from combining their models.

Solving a problem such as this takes time and perseverance, among other things.

1 thought on “How to win a Data Science competition ?”